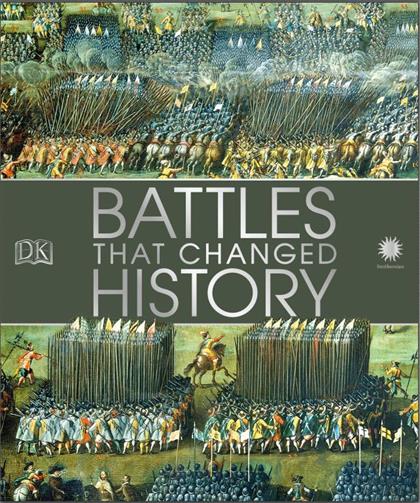 Discover the stories behind more than 90 of the world’s most significant battles in this lavishly illustrated history book.

The most important battles ever to take place are brought to life in the most spectacular way. From the brutal battle of Gettysburg to the epic air-sea battle of Midway, find out how fateful decisions led to glorious victories and crushing defeats.

Journey through the battlefields of history and follow the key developments of World War I, World War II, the Cold War and more in unprecedented visual detail. Using maps, paintings, artifacts and photographs, Battles That Changed History is a guided tour of every major conflict in history.

Explore the stories behind more than 90 important battles and discover how pivotal moments and tactical decisions have altered the course of history. From medieval clashes and great naval conflicts to the era of high-tech air battles, key campaigns are illustrated and analyzed in detail. Learn incredible facts about the weapons, armor, soldiers and military strategies behind some of the greatest battles ever.

This reference book includes profiles of famous military leaders like Alexander the Great, Napoleon and Rommel. See how kingdoms and empires have been won and lost on the battlefield. Go into the thick of combat at the Great Siege of Malta, the Battle of Stalingrad and the icy waters of Dunkirk. It is the ultimate guide to the history of military conflict.

This stunning coffee table book from DK Books is a visual treat for history buffs, old and young. It includes a foreword from award-winning writer, TV presenter and historian Sir Tony Robinson whose TV credits include Time Team, Blackadder and The Worst Jobs in History.

From the ancient world to the nuclear war, each chapter of this military history book brings the key battles of the era to life:

The Communication Problem Solver：Simple Tools and Techniques for Busy Managers

Surrogate Warfare：The Transformation of War in the Twenty-First Century