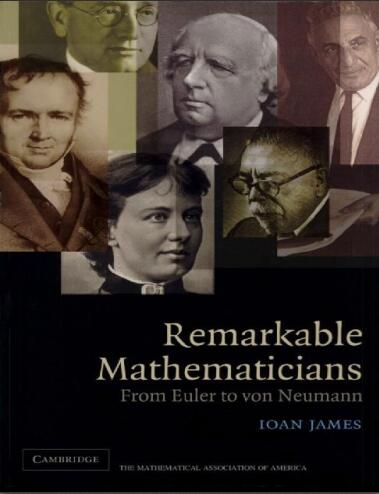 Ioan James introduces and profiles sixty mathematicians from the era when mathematics was freed from its classical origins to develop into its modern form. The subjects, all born between 1700 and 1910, come from a wide range of countries, and all made important contributions to mathematics, through their ideas, their teaching, and their influence. James emphasizes their varied life stories, not the details of their mathematical achievements. The book is organized chronologically into ten chapters, each of which contains biographical sketches of six mathematicians. The men and women James has chosen to portray are representative of the history of mathematics, such that their stories, when read in sequence, convey in human terms something of the way in which mathematics developed. Ioan James is a professor at the Mathematical Institute, University of Oxford. He is the author of Topological Topics (Cambridge, 1983), Fibrewise Topology (Cambridge, 1989), Introduction to Uniform Spaces (Cambridge, 1990), Topological and Uniform Spaces (Springer-Verlag New York, 1999), and co-author with Michael C. Crabb of Fibrewise Homotopy Theory (Springer-Verlag New York, 1998). James is the former editor of the London Mathematical Society Lecture Note Series and volume editor of numerous books. He is the organizer of the Oxford Series of Topology symposia and other conferences, and co-chairman of the Task Force for Mathematical Sciences of Campaign for Oxford.

Word by Word The Secret Life of Dictionaries

Truth of the Russian Revolution, The The Memoirs of the Tsar’s Chief of Security and His Wife